With two reigning Olympic champions, a Tour de France winner, previous Absa Cape Epic winners, including record holders Christoff Sauser and Karl Platt, and loads of world champions, this year’s race is expected to be more competitive than ever. Over and above that, every single team will have to stand together in order to overcome various obstacles and at the end of the day #ConquerAsOne. The 2017 Absa Cape Epic takes place from 19 to 26 March. Here is a summary of each day, as it unfolds.

Prologue:
What started off as a smooth ride through the 26km of the Absa Cape Epic Prologue, soon took a turn for the worse when Absa Pride riders, Freddie Meyer and Neil Fourie started to experience technical difficulties during the Hoogekraal climb. “Neil’s freehub broke, so we had to take turns to push and run up the mountain. We did that for quite some time until we got about 6km from the finish,” Freddie explained.

To make matters worse, Neil is taller than Freddie, so each time they swapped bikes in order to let the person who was running, ride again, the seat had to be adjusted. “We were very worried that we were going to miss the cut-off time, but after a while, we eventually found out that cut-off time is 3 hours, which is a bit longer than we initially thought. We could finally relax and complete the last few kilometres with less stress.”

According to Freddie, this experience has helped Neil and him truly understand what it means to Conquer as One, and as a result, they are our #ConquerAsOne moment for the 2017 Prologue. 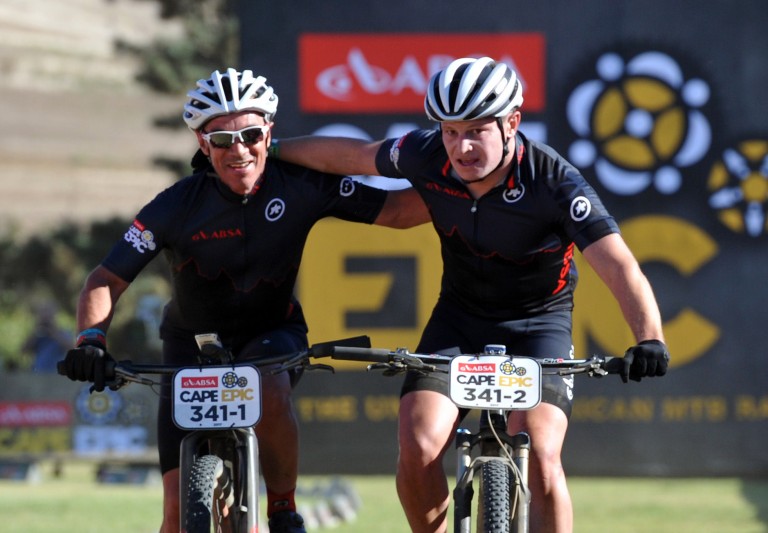 Stage 1:
While temperatures of higher than 35 degrees pushed the riders to their limits in some spots, a total climb of 2300 metres - almost twice the height of Table Mountain - made for a tough day at the office for most of the 2017 Absa Cape Epic riders. A bunch of riders missed the cut-off time, and many more fell to everything from dehydration, injuries, cramps, and even heatstroke. There were numerous #ConquerAsOne moments to be seen in Hermanus today, but one, in particular, caught our eye: After the Ascendis Health pair consisting of former Olympic gold medallist, Sabine Spitz and her riding partner, Robyn de Groot, had to overcome mechanical issues, Sabine cut open her forehead after a bad fall in one of the rocky areas. They still managed to finish the stage in just over 5 hours and 19 minutes - claiming the second place in their category.

According to Spitz, it was one of her worst days on the job.

Stage 2:
The second stage of the 2017 Absa Cape Epic was originally planned to take the riders from Hermanus to Greyton. After a grueling first stage with unexpected heatwave conditions, and another day of temperatures in excess of 45 degrees expected, a difficult decision had to be made with the riders’ safety in mind.

After much deliberation and consideration, the route was shortened from 102km to 62km, to limit the pressure on the riders’ already worn out bodies.

This resulted in the race now ending at the last water point just outside of Caledon, creating a series of logistical challenges, including transport of riders and bikes to the race village, event infrastructure and technical set-up within only a few hours. An enormous amount of teamwork between the event organisers, sponsors, volunteers, riders and supporters was required to pull this off - and they did. At the end of the day, despite many obstacles, the Absa Cape Epic was the winner.

Congratulations to everyone involved in any big or small way today, together we all managed to #ConquerAsOne

Stage 3:
Putting your body through days of physical and mental endurance is tough and challenging to say the least. Now imagine attempting this with a neuromuscular disease that results in muscle weakness and extreme pain. It may seem like a near-impossible feat, but for 29-year-old Bruce Campbell, Pompe disease is his reality, and he isn’t letting that stop him from achieving his dreams. Not only is he defying everything that medical experts told him by taking part in this year’s Absa Cape Epic, but he is still going strong with his partner, Anthony Daniels.

“I had to train for about a year and a half just to slowly build my intensity so that I’m able to go faster for longer while burning my fat, instead of glucose. I also get infusions every two weeks, and that’s helping to put the enzymes back into my body. I have to pace my race very carefully, but it’s such a privilege to be here,” he explained.

Bruce’s determination and contribution to raising awareness to this rare disease inspires us, and other riders around him. That’s why his performance at this year’s Absa Cape Epic has won our #ConquerAsOne moment of the day.

Stage 4:
Dudley Turner completed Stage 4 - the longest of this year’s Absa Cape Epic - after having dislocated his ankle. Things were going well for him and his German riding partner, Till Streichert, when the unfortunate accident occurred a mere 5km from the finish line.

In an act of bravery, Dudley managed to put his dislocated ankle back into place and continue riding. It wasn’t long before he slipped again and found himself in the position where he couldn’t put any pressure on his injured foot. Determined to finish the stage, Till pushed Dudley up the last steep hill of the stage, and then ran down to get his own bike while Dudley waited for him at the top.

After remarkably conquering the hill, the pair was able to roll to the finish line, where they managed to complete the stage with smiles on their faces.

We’re inspired by their tenacity and resilience, that’s why Dudley and Till are our #ConquerAsOne moment of the day. 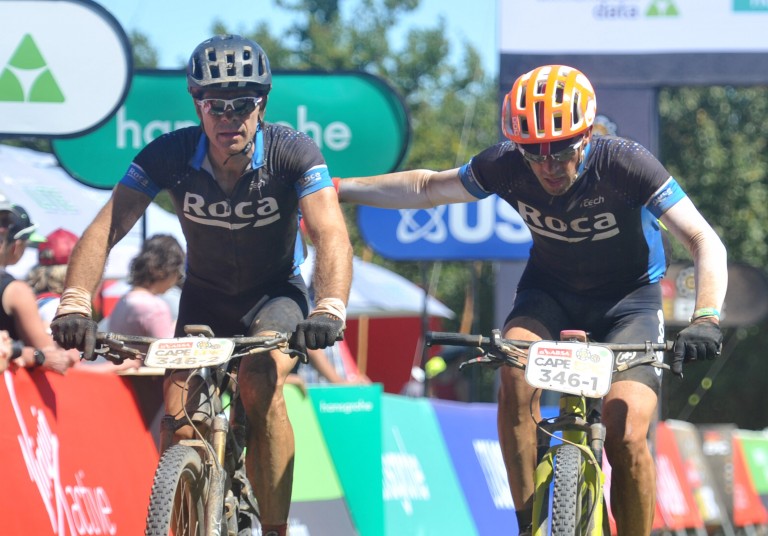 Stage 5:
Matt Cook and Sefiso Mkhabela are a colourful and energetic riding pair, known by the rest of the field for their constant fun-loving behaviour. The two cyclists take our #ConquerAsOne moment for the day. Not only did they finish Stage 5, which started and ended at Oak Valley in Elgin, but they did so after Matt crashed and broke his ankle with 15km of the 84km to go.

"My axel broke really early in the day and Matt managed to McGyver it so that I could continue. Then I had a hard fall, and finally 15km out, Matt crashed going through a berm and his handle bars locked. Despite the severe pain he was in, he pushed through to the end. All Matt could say was, ‘I’m going to finish this race no matter what, and I’m going to be doing the Iron Man next week."

We wish Matt a speedy recovery. 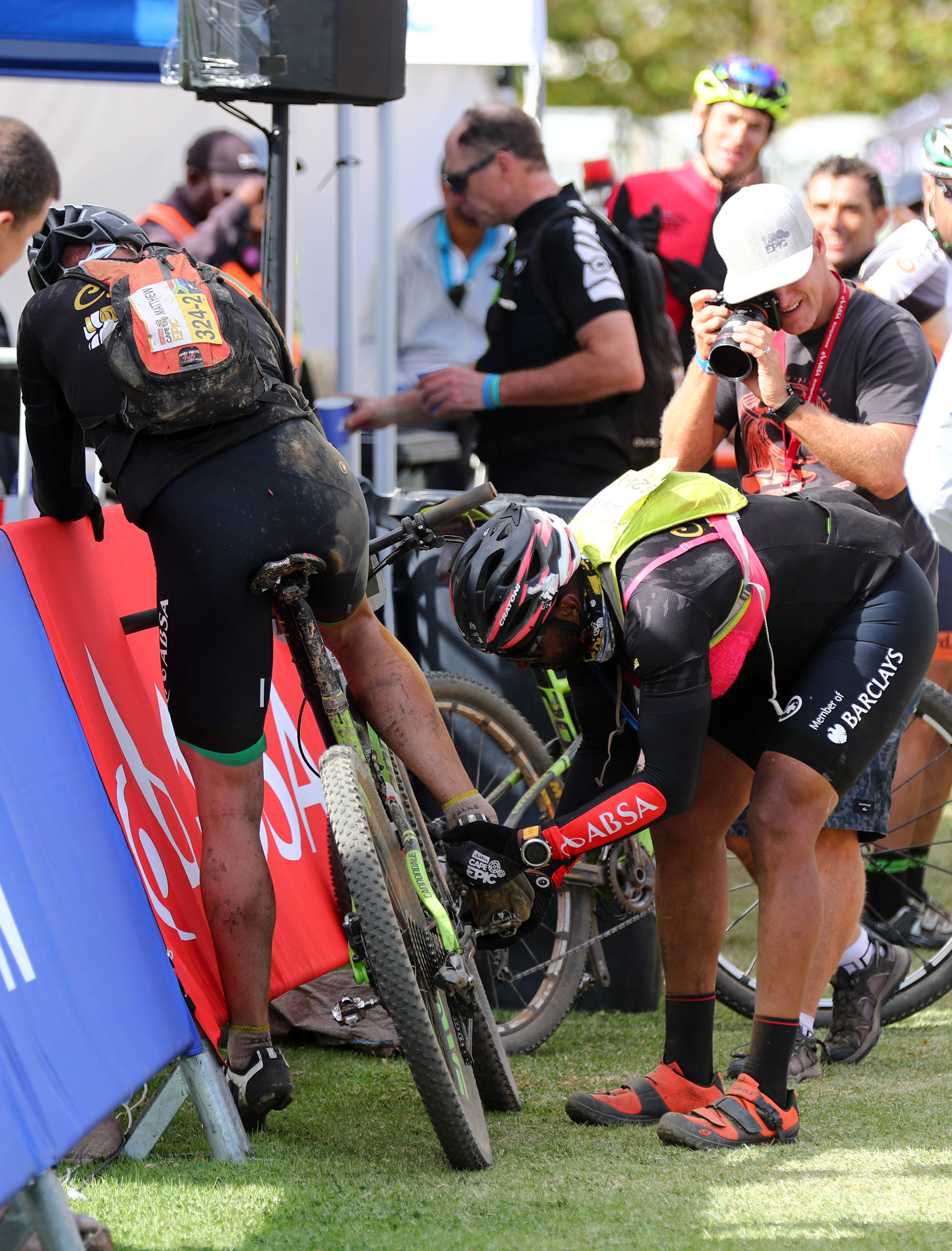 Stage 6:
Four weeks ago, Andrew Hirsch broke his wrist in a mountain biking accident, but the injury didn’t stop him and his partner, Colin Spencer, to take part in the race. “We already had the entry, so we were going to ride anyway,” Andrew laughed.

Their Absa Cape Epic journey had been smooth sailing, until bad luck struck during the Queen Stage - Stage 6 - when Andrew’s derailleur broke. The incident thrust Team Blood, Sweat and Beers into a predicament, but with 20km left before the finish line, they knew they had to push hard. “It wasn’t the most comfortable situation. I was riding the bike at single speed, so I had to pedal really hard to make it through and luckily, Colin was there to push me in the parts where I really needed help.”

The two riders are thrilled that they’re still part of the race despite the difficult obstacles they endured. “It’s been an awesome week. Teamwork is everything and without it, we wouldn’t have made it through the day.” We’ve chosen Andrew and Colin for our Stage 6 #ConquerAsOne moment because they truly inspire those around them to rise above their circumstances and come through the other side.

Stage 7:
The last day of this year’s Absa Cape Epic was filled with joy, relief, accomplishment and pride. After the 691km of the 2017 race was conquered by the riders, we decided that the winner of our Stage 3 #ConquerAsOne moment is the ultimate example of what Conquer as One means.

29-year-old Bruce Campbell did not only defy everything that medical doctors and textbooks say about the human body, but his story touched everyone around him - including us. Pompe disease is a neuromuscular disease that causes extreme muscle weakness and pain, because of a build-up of a complex sugar called glycogen. This impairs organs from functioning normally, and ultimately means that the body burns its own fat when exercising or during any other strenuous activity. Despite this, Bruce has overcome this condition to complete his first Absa Cape Epic, with his partner, Anthony Daniels.

“Nothing in life should hold you back from chasing your dreams,” an emotional Bruce said after crossing the finish line.

Bruce’s determination and contribution to raising awareness to this rare disease inspires us - that’s why his performance at this year’s Absa Cape Epic has won our #ConquerAsOne moment for the 2017 event. 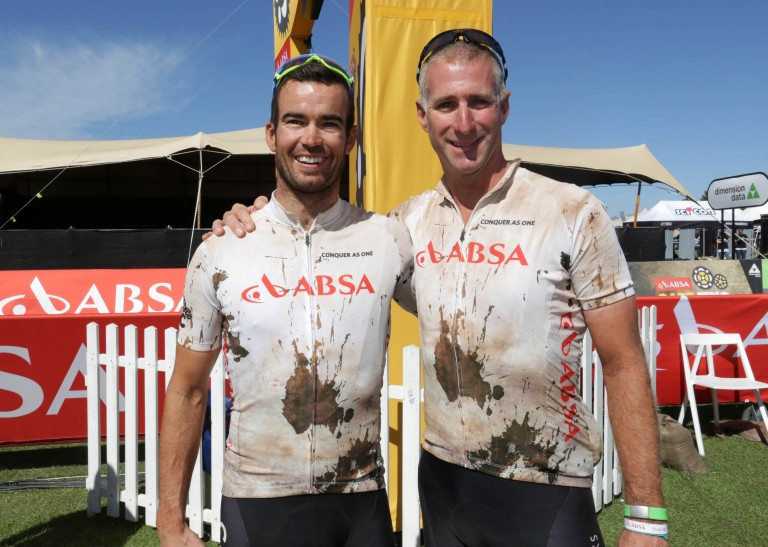 On another note, there are also wedding bells in the air. Absa Pride’s very own, Nico Kotze and Yolandi Steyn entered the Absa Cape Epic together in 2015. They decided that if they managed to finish the race, they would move in together. They crossed the line 47th in the mixed teams’ category. So as promised, they took their relationship to the next level. This year they took part once again, but Nico wanted to make 2017 even more memorable. The only way he saw fit, was to propose to Yolandi just as they crossed the finish line and she said yes. We’re wishing them all the best and we hope to see them again next year. 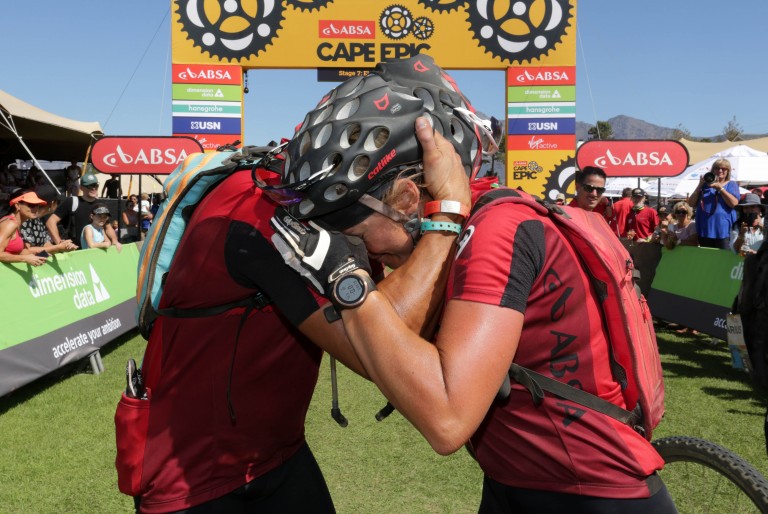 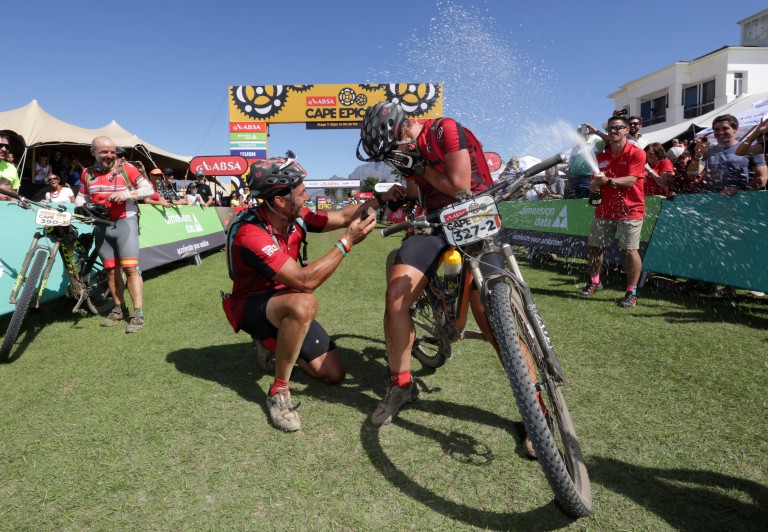 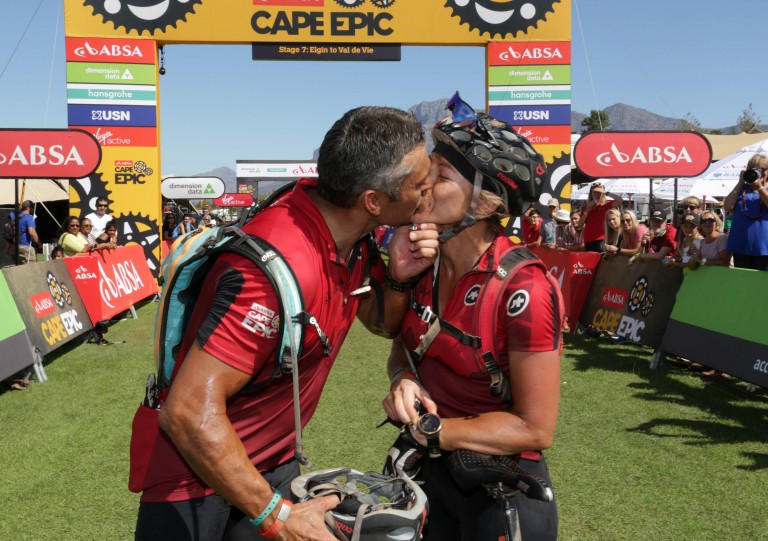