Let’s be honest, no one wants to think about death. It’s an uncomfortable topic. So, instead of having those important conversations about what will happen to our assets and how our loved ones will be affected once you’re gone, most of us just avoid the topic entirely. You’re too young to die, and death won’t come knocking on your door anytime soon, right? Well, not entirely. While no one wants to think about dying tomorrow, it is more important than ever to get your affairs in order sooner, rather than later. Why? For starters, so that your family isn’t financially burdened and forced to undergo a complete lifestyle change as a result of your death. Besides that, stats show that 50% of South Africans can’t afford to die, because the amount that will be paid out after death isn’t nearly enough to cover debt and liquidity.

So, in the light of this, we sat down with Riaan Botha, Head of Wealth and Investment Management and Insurance (WIMI) Fiduciary Services, and asked him to make sense of wills, estate planning, trusts and everything in between.

First things first, no matter what your age, you should holistically look at your finances. “I can’t tell you how important it is for people to look at their will and liquidity as part of their financial planning process. If you’ve got a home loan or any other debt, at least make sure that’s covered by your life insurance policy.”

When it comes to life insurance, the biggest consideration is that it should never be just enough to cover your debt. “When you die, you would obviously like for your family to be in the same position they were in when you were alive. So, in order to make that happen, your life insurance should also provide for your income. A lot of people take out life insurance just to cover their debt and then a massive lifestyle gap exists in the family after death,” Botha explained.

Furthermore, 78% of South Africans currently die without ever drawing up a Will. This means that your estate will be divided in terms of the law of intestate succession. “A non-existent, unsigned or incorrectly signed Will can cause practical problems and place surviving family members and dependants under immense stress when you aren’t around to assist them in making financial decisions. It means that the deceased estate will be distributed in accordance of the Intestate Succession Act 81 of 1987. These rules may well be contrary to the testator’s intentions and/or may not necessarily be beneficial to those left behind,” Botha continued.

If that isn’t enough to convince you, here are a few more reasons why you should make some time to draft and finalise your Will. 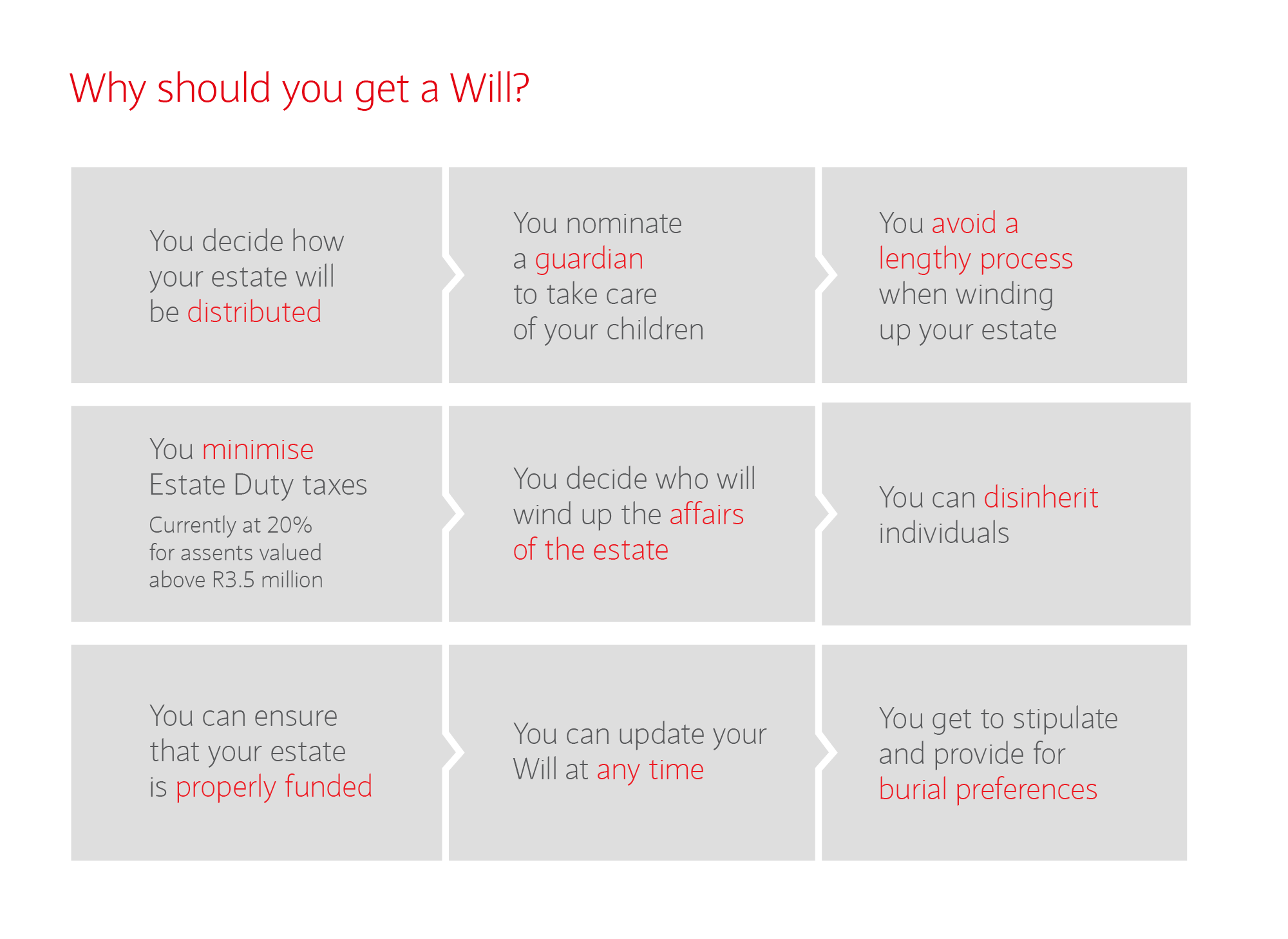 So, with all of that in mind, the next question is, how do you approach this the right way and avoid creating unnecessary admin and stress for your loved ones once you’re gone? According to Botha, the legal requirements for a Will are:

He continues that it’s also a good idea to avoid the most commonly made mistakes by keeping the following in mind:

Apart from this, you should never underestimate the importance of proper estate planning – and no, it isn’t just something that only the super-rich have to do. “Standardised Wills are usually not adequate when it comes to more affluent client’s estate. Proper planning needs to be implemented in order to reduce tax implications as well as to protect and grow assets outside the estate of the deceased. This can be attained by establishing a family trust and/or a testamentary trust which will then be the owner of these assets for the benefit of certain individuals (the beneficiaries).”

Confused by some of the terms used in this article? No worries, here’s a glossary of terms and some extra information. 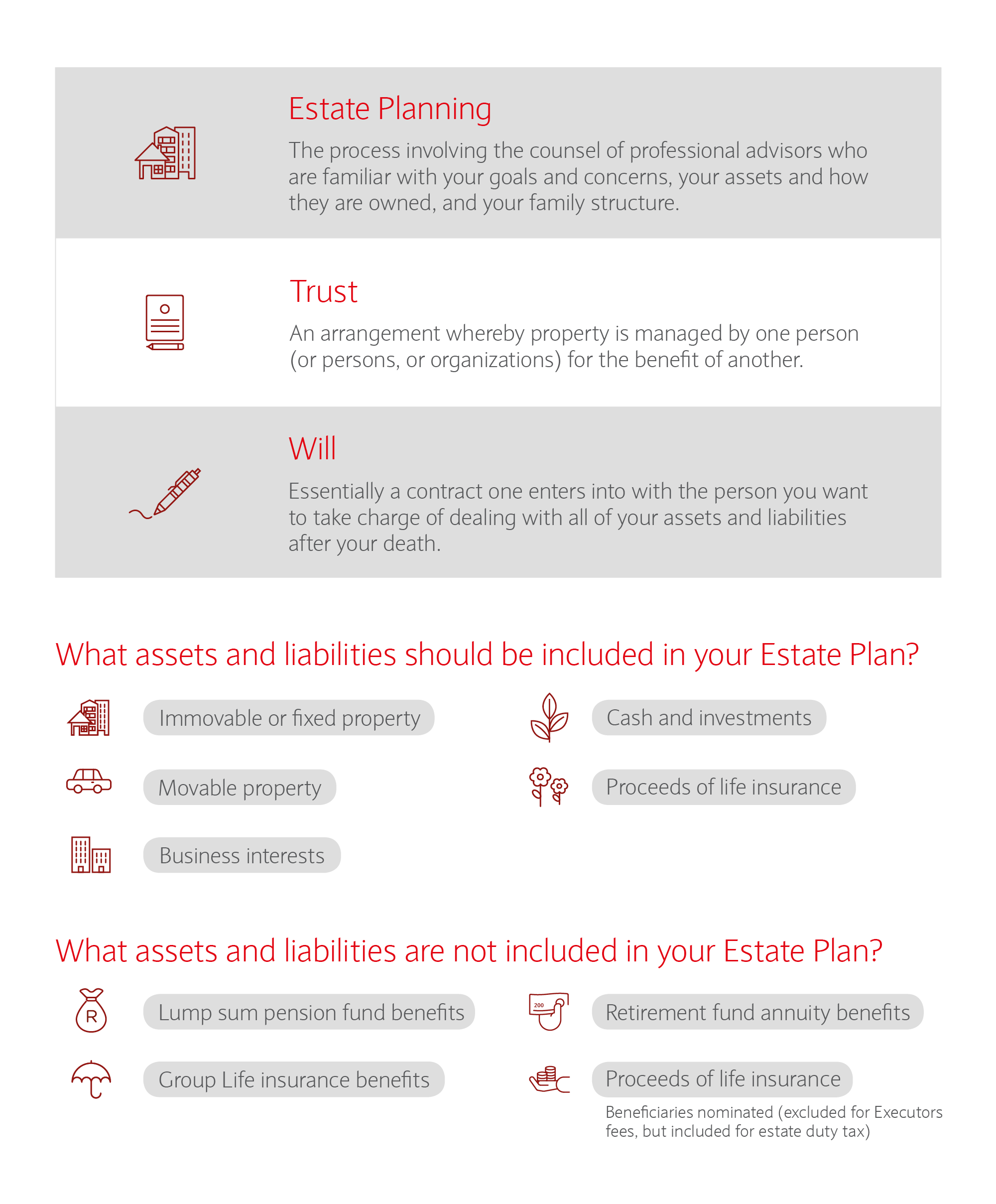 If you’re thinking that it’s time to get your affairs in order, don’t worry – we’ve got you covered. Come see us, and we’ll give you a holistic solution so that you can live out the rest of your years knowing that when death comes knocking, you’re prepared. We’ll also give you a free Will within 30 minutes. Sounds good? Call us on 0860 627 775, send us an email on legalclaimstrust@absa.co.za, or visit our website.