Currency Fluctuation: What It is and Why You Should Care

If you’ve filled up your fuel tank or bought any basic commodity over the last couple of months, you’ve probably noticed an increase in prices. Conversely, the price of fuel sometimes drops, bringing a welcome relief to motorists. But have you ever wondered what causes the rise and drop in commodity prices?

While there are several factors at play, the most significant cause is the fluctuating value of a country’s currency. The increase and decrease of a currency’s value can have far-reaching effects that affect your wallet and ultimately impact the economy. We’ve seen this happen with our own rand in the past few months as our currency tumbled to new lows, igniting predictions that it will hit the R20/1USD mark by the end of the year.

But as it stands, things are looking good, with the rand recently showing enviable improvement against the dollar. This begs the question: what causes a currency’s value to fluctuate? To unpack this and other enigmas associated with currencies, we caught up with Chris Gilmour, an investment analyst with Absa Wealth & Investment Management.

There are quite a few factors. These are a few of them:

Why do some countries’ currencies fluctuate while others don’t?

Most countries have no exchange control, that’s why their currencies fluctuate in relation to the dollar. Countries like South Africa operate a flexible exchange rate system, which means the value of the rand is determined by the market forces of supply and demand. The demand for a currency relative to the supply will determine its value in relation to another currency.

Speaking of the US dollar – why is it used as the standard unit of currency?

It’s by far the most tradable currency on earth. Of the four major currencies in the world – the US dollar, euro, British pound, Japanese yen – the dollar probably accounts for two thirds of all currency trade in the world.

When the Bretton Woods Agreement [the landmark system for monetary and exchange rate management] was formed in 1944, America had the biggest economy in the world, and still does.

So if the worst were to happen and the US economy crumbled, would the world shift to the next strongest currency as the standard unit of measure?

Yes, but the problem with that idea is that the next biggest currency is the euro, and it’s in severe distress. Many people have even questioned if the euro will exist in ten years’ time. Sure, it’s the world’s biggest currency after the dollar, but would that necessarily make it the best currency to use if there was a flight from the dollar? Probably not. Maybe the Chinese yuan would be better.

How does the strength or weakness of a currency affect the ordinary person?

The strength or weakness of a currency always reflects on the prices of goods. If a country’s currency is weak and it imports more and more into the manufacturing process, the cost of the finished goods becomes significantly higher than it otherwise would have been. But if you’re able to manufacture more of your inputs locally, you’ve got a good chance of keeping prices stable and inflation low.

On the other side of the coin, if the currency is stronger, finished goods easily become cheaper.

Is the rand an easily tradable currency?

The rand is a highly traded currency all around the world. There’s always ready buyers and ready sellers.

Let’s talk about the Big Mac Index – what is it and how does it work?

The Big Mac Index is a principle created in 1986 by [British magazine] The Economist as a way to measure the purchasing power parity (PPP) between countries, using the price of a McDonald’s Big Mac burger as the benchmark. Its principle is simple: the input costs into making a burger should be roughly the same around the world, and if they’re not, the differences should be explained by the difference in the value of currencies.

However, there are a number of problems with The Big Mac Index, one of which is that it misses a very important point: a consumer’s ability to purchase, or affordability.

Below is a view of the rand/dollar exchange over the last 35 years for more insight: 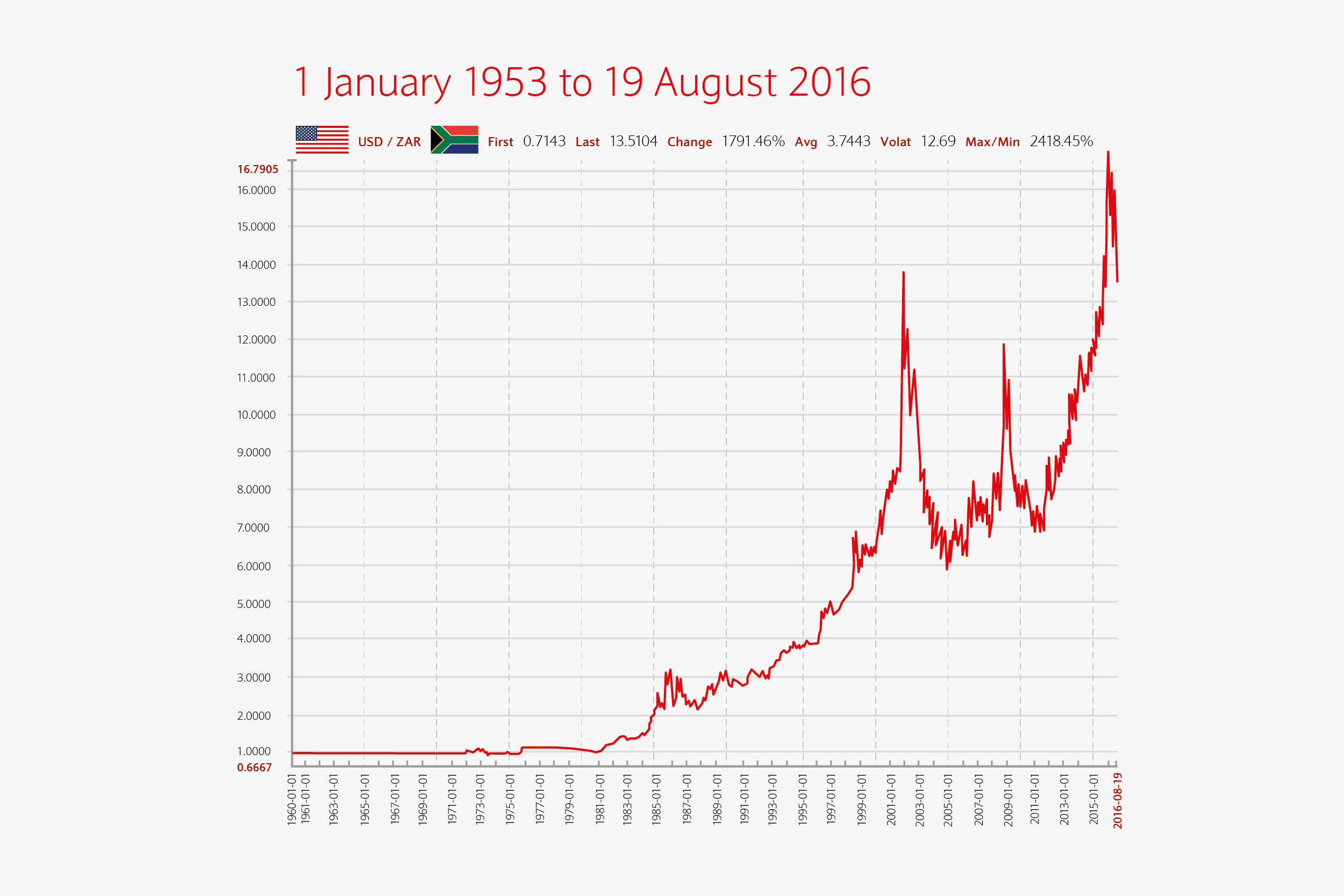