After the rollercoaster credit-rating ride that was 2017, many of us might be suffering from junk status fatigue (read about it here, here and here). However, having deferred a rating decision until after the ANC conference in December and the 2018 budget speech, Moody’s is set to make their announcement by Friday, 23 March. As the only major agency to have held off from downgrading South Africa’s credit rating to junk status, what they decide could affect South Africa’s ability to move forward after a politically and economically tumultuous 2017. 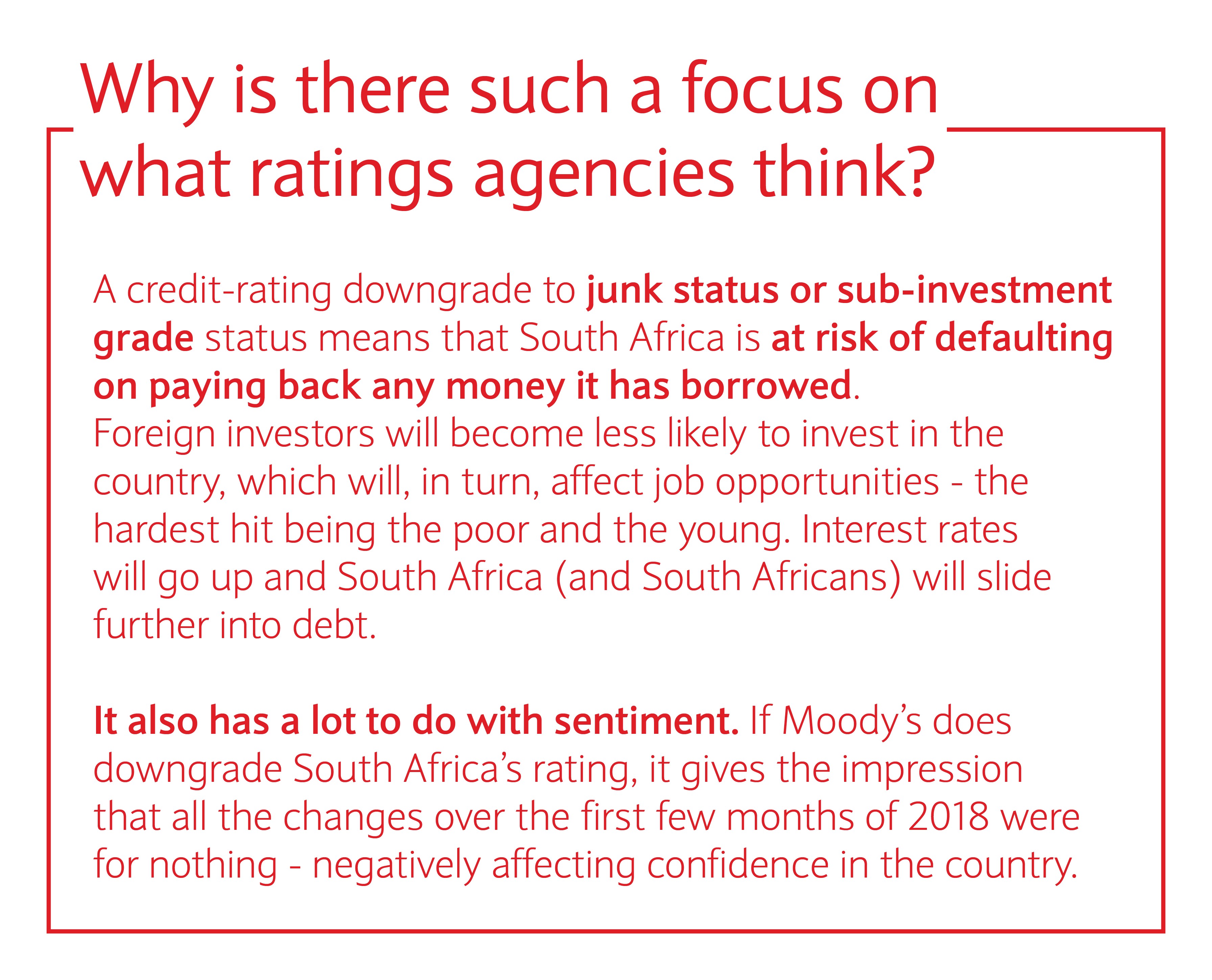 We sat down with Craig Pheiffer, Chief Investment Strategist at Absa Stockbrokers and Portfolio Management, to find out what to expect. Given the many changes that have happened in South Africa since S&P’s November decision to downgrade the country, he assures us that the outlook is cautiously optimistic. “The fourth quarter’s GDP shows that the economy was growing by 1.3% last year, which was better than most people were expecting.” In fact, he points out, the new Finance Minister Nhlanhla Nene has said that we can do better than the 1.5% expected growth, announced by the previous Finance Minister Malusi Gigaba, during the February 2018 budget speech and is set to revise it.

On that note, we look at the recent political changes that include President Cyril Ramaphosa’s replacement of former President Zuma and a cabinet reshuffle that saw the return of former Finance Minister Nene.

Pheiffer is careful to point out that the change in leadership is too recent to influence the numbers. However, “it’s fed through to the immediate sentiment indicators. We saw a big positive swing in business confidence –  confidence at a consumer and corporate level is key. If people are confident, they go out and spend, and corporates will hire more.” All of which will help grow the economy, but it will take some time before we see this improved sentiment translate into actual growth.  These positive steps taken by the ruling party show that South Africa is getting back on track because economic growth and political stability are what ratings agencies look for. However, it is also certain that the agencies will take the ‘land expropriation without compensation’ debate, into consideration.

We move on to discuss the effect of the recent budget speech, which Pheiffer sees as a step in the right direction. There is, of course, still a way to go if you compare it to where the country was in February last year – in terms of budget deficit, debt stabilisation and fiscal consolidation. “We talked a good story,” he says. “And it was the old finance minister [Gigaba] so they may give us the benefit of the doubt – particularly with the economy growing a bit more – but it’s still precarious.” He unpacks this idea further, “The budget deficit for 2017 came in at 4.3%. In February [2018], we were talking about a budget deficit for 2017 of 3,3% with a budget deficit for the next three years of 3.9% (that has been revised to 3.6%, 3.6% and 3.5%). In February last year, we were looking at a deficit of 2.5% at the end of the budget horizon.” On balance, Pheiffer feels that the positive moves in the currency and bond market are reflecting a positive outcome from the Moody’s rating review i.e. no downgrade.

Moody’s is sure to acknowledge that some positive steps  have been taken by our state-owned enterprises (SOEs) such as Eskom and SAA but while things are starting to improve, we are still not out of the woods with our electricity provider and the national airline. Pheiffer predicts that proper change will take time as they weed out the corruption, eradicate debt and make lasting structural changes. But “the seeds have been planted.”

While it is unlikely to happen, we should consider the implications of a credit rating downgrade from Moody’s. “Well, we’ve already been downgraded to junk by two ratings agencies,” he points out. “So, as far as the price or the cost of raising debt – it won’t change too much. The biggest implication is that we would get booted out of Citigroup’s influential World Government Bond Index.” This means that foreign investors tracking the index would have to sell their South African bonds and the average South African could see a short-term weakening of the rand and bond yields.

South Africa is on the right track

Overall, South Africa is on the right track and Pheiffer thinks that it is possible in time to have  our credit rating restored to investment grade.  “We’d be fortunate to get it back in the shorter term as a lot would have to go right. If we look at other countries that have had their ratings downgraded and have come back, it’s a two-to-three-year journey or even longer. We need to improve the pace of growth in a politically stable environment, with continued institutional stability, fiscal consolidation and debt stability. That’s the magic sauce that will restore our investment grade status.” 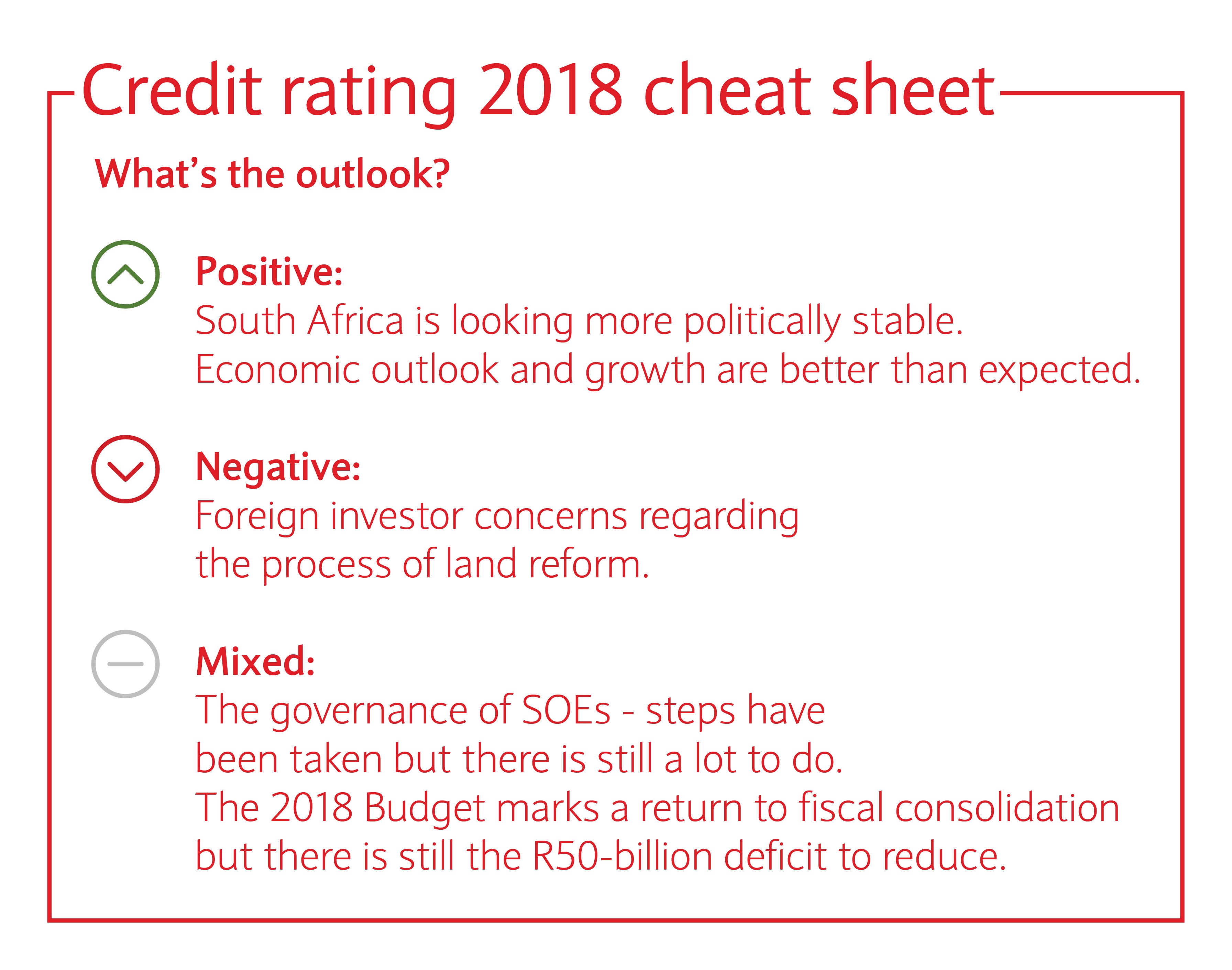