Does SA experience a greater pinch than other economies?

Consumers have had a tough year. The most significant impact on their pockets has been thanks to price increases in petrol and diesel. In the first week of October 2018, crude oil reached its highest recorded levels since 2014, trading at around US$86 per barrel. According to the Global Petrol Prices website, the world average prices for petrol and diesel sit at around US$1.17 and US$1.09 respectively. In South Africa, the dollar price is $1.18, which is in line with the global average price. However, when compared to BRICS (Brazil, Russia, India, China, and SA) and other emerging economies, South Africa is at the upper end of the spectrum, as you can see in the chart below. 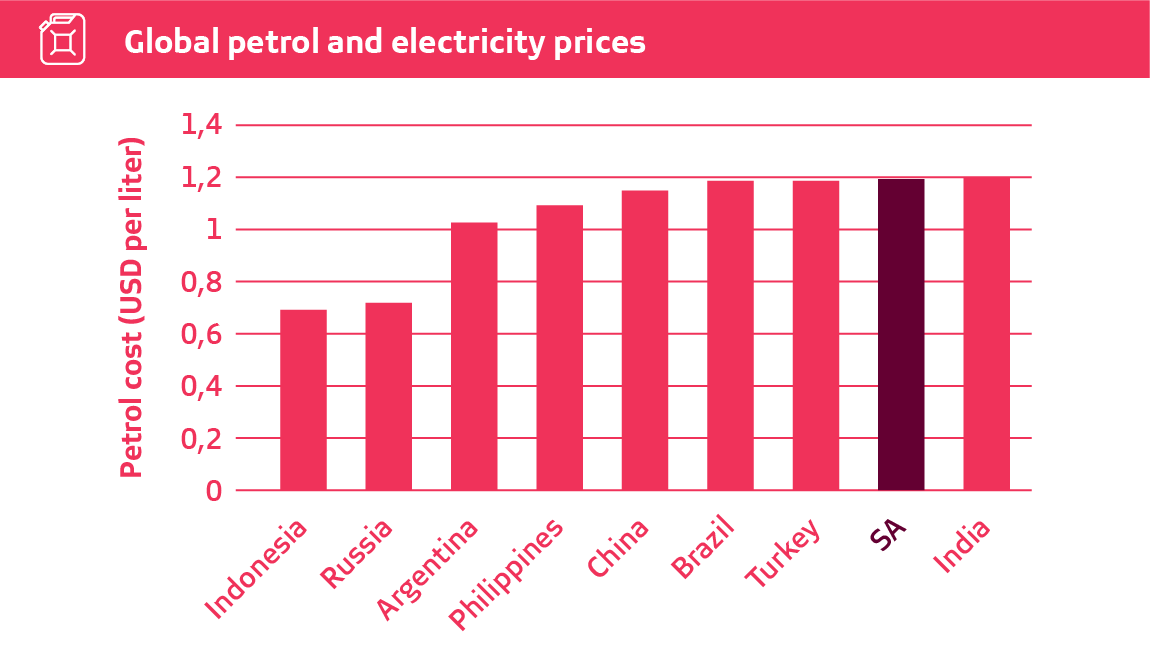 Converting local currency to US dollars makes global comparisons easier. It’s important to keep in mind that these figures will be more unpredictable for some countries, such as South Africa, because of the volatility of local currencies against the US dollar. Where petrol prices are concerned, oil importing nations such as Turkey, India, Philippines and South Africa will be most impacted. The only protection for these countries will be to increase interest rates to give much-needed support to their currencies. The currency plays a large part in adding to inflationary pressures, not only for fuel, but also for foodstuffs and other transportable goods. This feeds into decisions made by the Central Bank about the future path of interest rates. The South African Rand is the 4th worst performer within the emerging market basket of currencies for the year 2018. 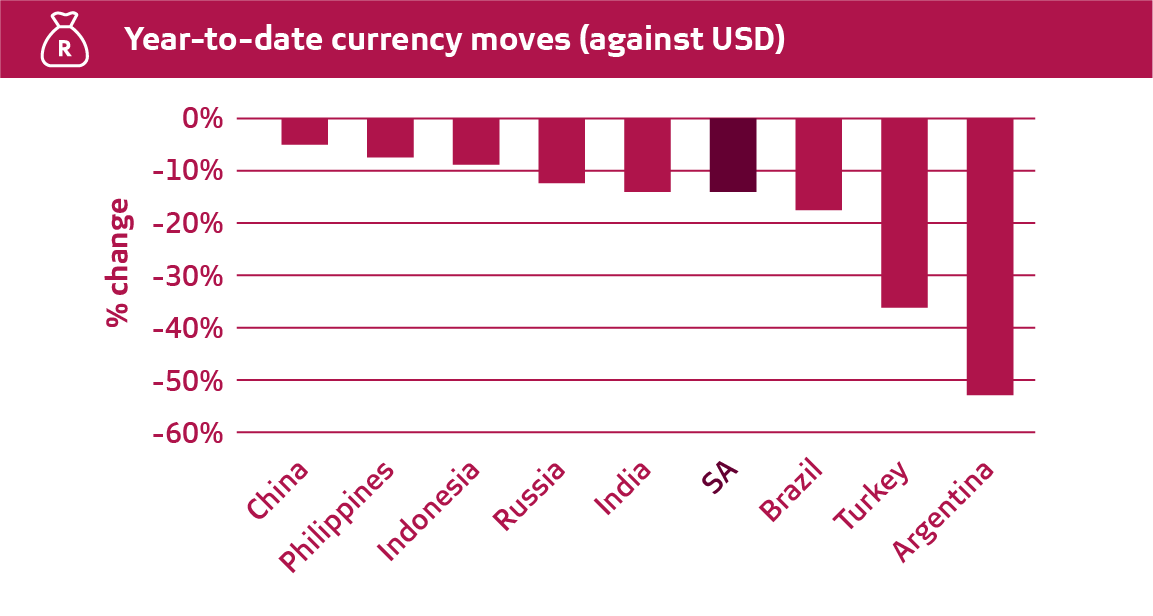 Electricity prices also feed into inflation figures and directly impact consumers adversely when prices increase. The National Energy Regulator of South Africa (NERSA) announced that Eskom was granted at least 4.4% in increases for the next financial year, kicking in on the 1st of April 2019. This amount is over and above the amount they will already be allocated by NERSA. Eskom gets their standard approvals in the Multi-Year Price Determination process, meaning that electricity price increases could be in the double digits when those two figures are added together. When compared with the same emerging markets as before, South Africa has the second highest electricity prices as shown below. 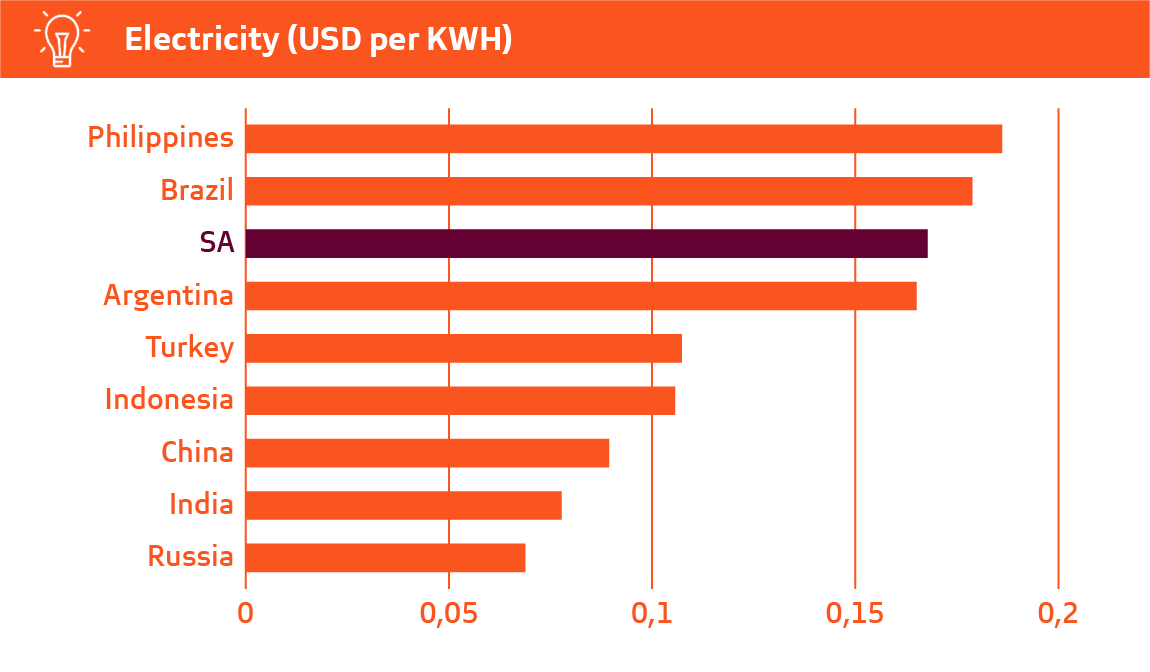 According to Numbeo, a site which calculates the global prices of goods, three of the five chosen foodstuffs used to compare prices see South Africa as the most expensive when compared to the basket of chosen emerging market countries. Numbeo calculates the cost of goods at the minimum recommended amounts for an individual to consume per food type in US dollars. 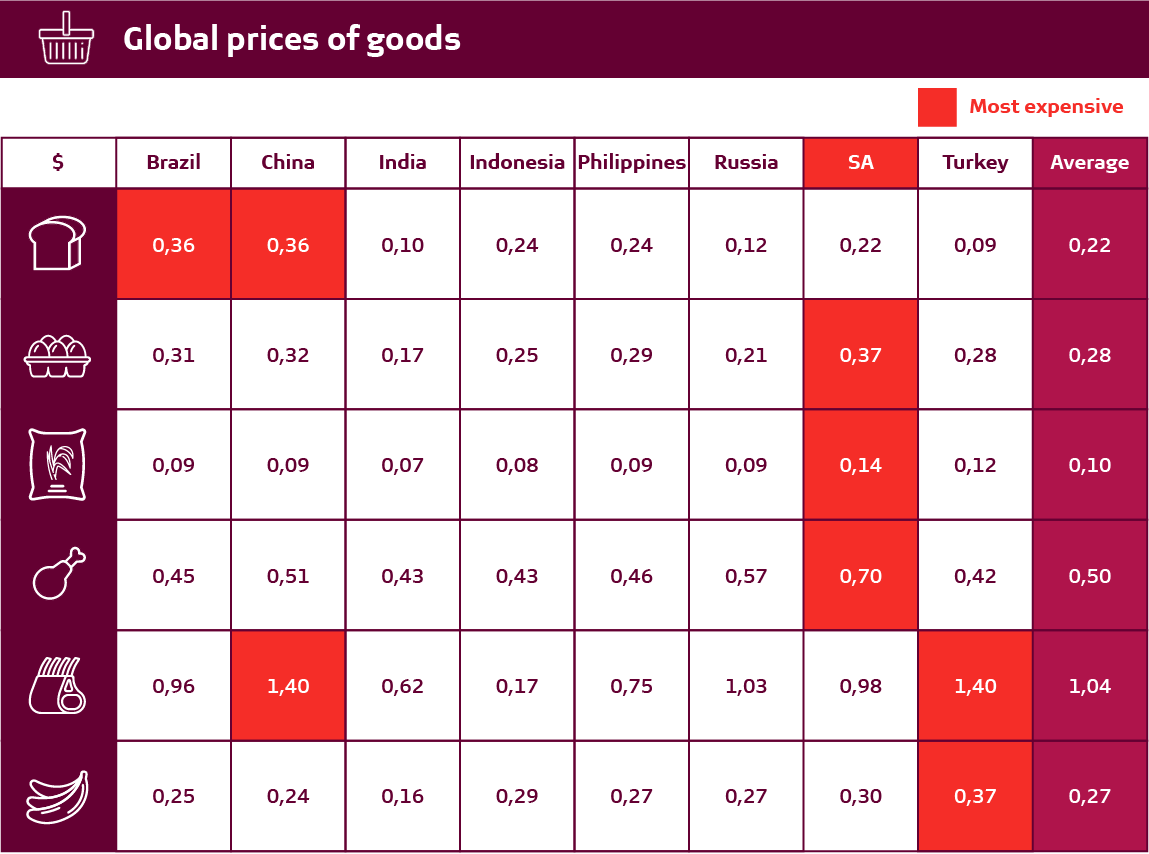 South Africa is currently in a technical recession after printing GDP numbers of -2.6% and -0.7% in Q1 and Q2 respectively. The expectations are that the 2019 presidential elections will be crucial in driving the future direction of the country. The government is trying to get private companies to invest in the country and help to kickstart growth, but business confidence is down and conditions are not conducive for most sectors. The grip on consumers continues to tighten and there is little sign of tensions easing. In light of this, now is the time to reassess spending patterns and to reduce and consolidate debt. Higher debt levels will only put further pressures on consumers once interest rates start to rise. For those holding excess cash, saving and investing is imperative and the use of a financial advisor is prudent, as they can guide one on the suitable investment vehicles. Time and compound interest are the foundation of wealth building. Invest now to start creating the wealth you deserve, no matter what our country’s economic movements have in store for the future.