Why should investors care about sharing? Well, the swift rise to prominence of companies such as Airbnb and Uber, emphasises the importance of identifying sectors and companies potentially at risk of similar disruptions.

Sharing businesses have emerged as the hot topic in the current wave of technology excitement. Start-ups compete to be ‘the Airbnb’ of every industry imaginable and for the capital that label can attract.

The impacts are already clear in several sectors. Airbnb itself advertises three times more beds than the world’s largest hotel chain. Meanwhile, Uber has become the largest passenger transport network. Remarkably, despite the inroads they have made into established markets, those examples are still very young; Airbnb was founded just eight years ago, and Uber only launched in 2011. Identifying sectors vulnerable to similar disruptions and understanding incumbents’ exposures and strategic responses is increasingly vital given the scale and speed with which change can unfold.

The disruptive impact of sharing businesses is already clear.

Heavy investment has provided new entrants with war chests for assaults on established industries. Coupled with short lead times, the commercial impacts can be substantial.

The drivers of this growth are swelling…

These include access to communication technologies, increased trust and social acceptance of online exchanges and sharing, recognition of the existing inefficiencies and the savings those models can deliver to consumers, and flexible working patterns. Those trends are strongest among younger generations, who represent the most active users of sharing businesses.

Few opportunities to invest in the theme through public equity markets

Able to scale with limited capital, most sharing businesses operate outside public equity markets and provide little visibility into their finances or operations. Our main focus is, therefore, on the ability of incumbent companies to defend their competitive positions, and potentially ride the growth opportunities this presents if they are able to adapt quickly enough.

In markets for which sharing businesses started earlier and have achieved greater scale, the impacts on established incumbents are already becoming clear and are set to redefine growth rates and profitability over the coming decade.

“The legitimacy of business has fallen to levels not seen in recent history… a big part of the problem lies with companies themselves, which remain trapped in an outdated approach to value creation that has emerged over the past few decades. They continue to view value creation narrowly, optimising short-term financial performance in a bubble while missing the most important customer needs and ignoring the broader influence…”

But more sectors may be at risk
Where no major players have yet emerged, penetration is lower or behavioural change is slower, the effects are less obvious. However, we expect that sharing models will appear in a much wider range of markets than has been seen to date, with commensurate impacts on incumbent industries.

By examining large categories of spending on consumer durable goods with low utilisation rates and for which physical sharing is straightforward, we have identified markets we think are likely to face disruption, including travel equipment and sports goods, luxury jewellery and accessories, apparel and footwear.

While there is no single solution, it is clear that incumbent companies in exposed industries will need to plan for significant changes. The experience of lodging or transport (through Airbnb or Uber) demonstrates the speed with which change can unfold; and the inability of incumbents to adapt after that trend has become established.

Sharing businesses are typically based on a kernel of innovation that allows them to undermine the economics of traditional peers. Airbnb uses the scale of an online marketplace to allow homeowners to generate a positive return on property, albeit often lower than hotel groups would demand for the same investment, and eliminates redundant administrative and service overheads its users don’t require. Uber similarly leverages an online market place, combined with advances in navigation technologies, to bring together self-employed drivers and passengers.

Had incumbents recognised those business model opportunities, they might have more easily stemmed their growth by adapting their own strategies. 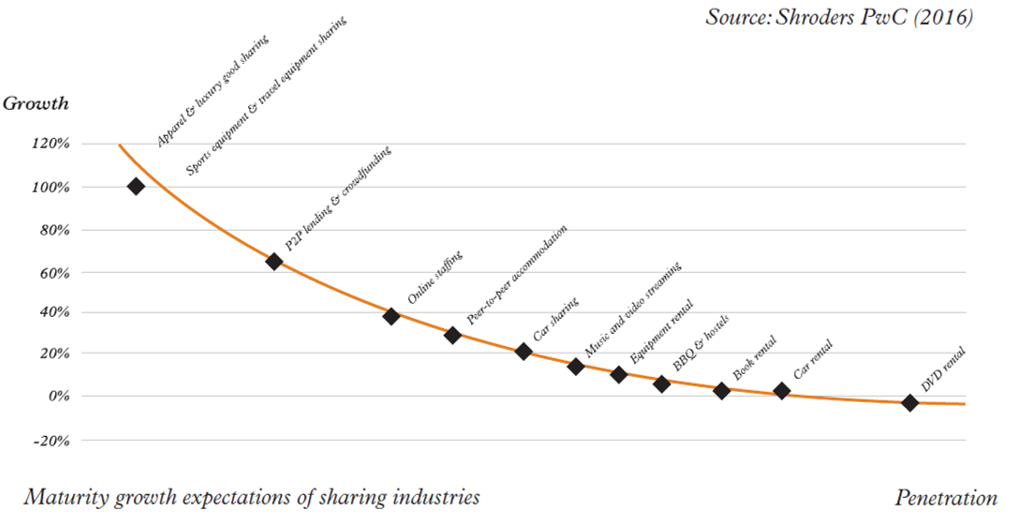 Every industry will face different challenges

The priority for incumbent companies is to identify ways new entrants could undermine traditional business models and to invest in exploiting those openings themselves. In that sense, the sharing economy is similar to any other disruptive threat, made easier by the rising penetration and comfort with online exchanges. For example, US peer-to-peer insurer Lemonade, is apparently looking at ways to leverage behavioural analytics and distributed ledgers (holding records with customers rather than centrally). Others – like Heyguevara, Bought by Many and Friendssurance – are building policy-pools that create small 'captive insurers' for groups of people or friends, who are likely to try to keep claims low so that their payments are lower in subsequent years. Many established insurers are developing proactive responses, for instance looking at ways to tailor risk analysis by making use of ubiquitous smartphone ownership to monitor driving behaviour and even patterns of leaving their homes empty.

The effects on incumbent companies will vary

The weak spots of traditional industries will vary but successful disruptors will deliver either better services, lower prices or both, to a material subset of customers. In principle, deep-pocketed incumbents with established brands and customer relationships should be in the driving seat. In practice, they can be held back by a strategic focus on established competitors and a resistance to change that might cannibalise their business.

Buying emerging competitors once they reach scale can work (Google’s acquisition of YouTube cemented its position), but is typically costly and difficult to execute without a commitment to invest in the new business and integrate it with existing business lines (Microsoft’s Skype purchase has been followed by a raft of similar telephony start-ups).

Shared value in a sharing economy

While a corporate mindset shift towards shared value is touted as a modern-day necessity, increasingly it must be accompanied by an understanding of a wider, global trend termed ‘the sharing economy’. Each speaks to the other, in terms of focus on community, humanity and a smarter division of resources.

So what is ‘the sharing economy’?

In essence, the sharing economy is a marketplace that connects individuals around the world digitally. Once connected, individuals can apportion assets – like cars, bicycles, a spare room, tools or even time – which are being underutilised. Some call it the ‘peer economy’. Others refer to the ‘collaborative economy’. All point to a more sustainable approach to using resources.

According to Rachel Botsman, commentator and the co-author of the 2010 book What’s Mine is Yours, “building trust between strangers” is the key to the success of well-known sharing economy companies like Airbnb and TaskRabbit. It’s about reconnecting with our humanness, “by engaging in marketplaces… which are built on personal relationships, rather than empty transactions.” she says.

During a TED talk on collaborative consumption, Botsman noted that, “The irony is these ideas are actually taking us back to old market principles and collaborative behaviours that are hardwired in all of us. They are just being reinvented in ways that are relevant to the Facebook age.”

The sharing economy is certainly changing the way individuals see supply and demand. But, says Botsman, “it is also part of a massive value shift underway where instead of consuming to keep up with the Joneses, people are consuming the get to know the Joneses.” Because the relationships are being thrust closer together by technology, trust is cardinal. The same trust which corporate strategies like shared value hope to build between their stakeholders.

“Reputation is the social, economic lubricant that makes collaborative consumption work and scale,” says Botsman. And the same applies to companies like Unilever, Nestlé, IBM, Discovery and General Electric. As shared value advocates Michael Porter and Mark Kramer wrote in Harvard Business Review in 2011, “The legitimacy of business has fallen to levels not seen in recent history… a big part of the problem lies with companies themselves, which remain trapped in an outdated approach to value creation that has emerged over the past few decades. They continue to view value creation narrowly, optimising short-term financial performance in a bubble while missing the most important customer needs and ignoring the broader influences that determine their longer-term success.”

In a sharing economy the corporate behaviours of old become even more transparent, highlighting the impact of real shared value, real social change and deeper emotional connections with customers.