“Aging is completely different than I expected it to be. It’s tough. But no matter which challenges get thrown my way, I will run until I die. And when my legs no longer want to work, I’ll take up another sport – who knows, maybe bowling would do?” 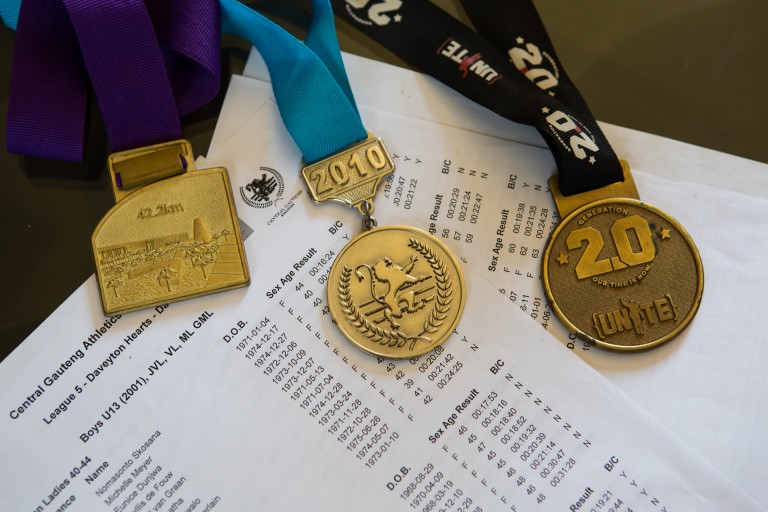 Welcome to the world of Nonhlanhla Hlatshwayo. It’s a world characterised by passion, purpose, and pain. Just like many people, she carries the pain of the past, but the difference is that in the midst of that suffering, she found her calling. At the age of 64, gog’ Nonhlanhla is a dedicated runner, and she has a string of medals to prove it.

This spirited gogo’s love affair with running started ten years ago when she turned to the sport with the hope of escaping a great trauma that still haunts her today. More recently, she started training the disadvantaged youth of Orange Farm, South of Johannesburg, in a bid to help them escape the harsh realities they face every day.

Nonhlanhla shares her story in her small, but beautifully decorated house in Orange Farm where she lives with her daughter. Before she begins, she eagerly shows off the crinkled papers that document the best running times in some of her races. “My life would’ve been completely different if my father didn’t pass away,” she contemplates.

She was only 12 years old when her dad passed on. Her mother didn’t want the responsibility of raising a child, so Nonhlanhla had no choice but to live with her ailing grandmother.

“I had to start working as a domestic worker and nanny very early in my life to get by. When I turned 18, I fell pregnant with my first boyfriend’s child. I found out that he had many other girlfriends and that one of them was imprisoned for killing one of his other women. She was later released due to a lack of evidence and then she came looking for me.”

Fearing for her life and that of her unborn child, Nonhlanhla fled to Johannesburg where her aunt had found her a job in Parktown.

“A few months after my baby was born, my aunt showed up with a woman that I hadn’t seen before. She later told me that it was, in fact, my estranged mother and that she brought her to me because she wants to help me raise my baby. They said that they wanted to help me so that I could focus on my job.”

Nonhlanhla felt uneasy about this offer, but she trusted her aunt – who insisted that the arrangement would be beneficial to her. So, she eventually agreed and said goodbye to her child, whom she would visit in Soweto every weekend. Everything went well – until she got an upsetting phone call one Wednesday afternoon. “My mother’s cousin called me to say that I should come over to take my child to the hospital. I questioned him because the clinic was 500 metres from their house. I couldn’t understand why they couldn’t just walk over there and take my child to get treatment. But he insisted that I should be the one to do it.”

“When I eventually got there, I found my child lying dead on the floor,” she explains as tears start rolling down her cheeks. Gog’ Nonhlanhla keeps quiet for a while before continuing: “The woman claiming to be my mother said that a tokoloshe came into their house and strangled my baby while they were sleeping. But how am I supposed to believe that?”

She starts sobbing heavily, blowing her nose into a checkered handkerchief.

A mere four months after this tragedy, Nonhlanhla was forced to marry her mother’s cousin. “I was very traumatised and depressed. I became epileptic, and I was diagnosed with high blood pressure. I had to do something about my health because I knew I wouldn’t live long if I didn’t. In 2006, I started running, and I could feel how the stress got lifted from my shoulders.”

With those words, Nonhlanhla disappears into her bedroom and re-emerges holding a plastic bag filled with colourful medals. 82 of them. “Every time I trained at the sports complex here in Orange Farm, I would come across young children who cut their feet on broken bottles and other pieces of rubbish scattered on the field,” she shakes her head. “Many of them are orphans looking for a distraction to help them get rid of their stress, just like me. So, I feel that it’s my duty to find sponsors so that I could help these kids by at least giving them proper running shoes to protect their feet.”

Securing sponsors isn’t the only gesture of kindness she extends to these kids – she also spends a few hours every day training between 30 and 140 children to compete in cross-country races under the Simunye Global Club.

“I never had much happiness as a child, so the least that I can do now is to try and give these children the joy that I never had. Before I die, I hope to know that I did everything I could do to uplift the youth in my community.”

Although Nonhlanhla is a pensioner by law, she strongly believes that age doesn’t define her. “I know it sounds very challenging, but if I can run 42 kilometers a day, eat healthily, and do other aerobic exercises, other pensioners can surely make an effort too? You should never feel like you have nothing left to achieve. Don’t sit and wait to eventually die. Live.”

“Aging is completely different than I expected it to be. It’s tough. But no matter which challenges get thrown my way, I will run until I die. And when my legs no longer want to work, I’ll take up another sport – who knows, maybe bowling would do?” 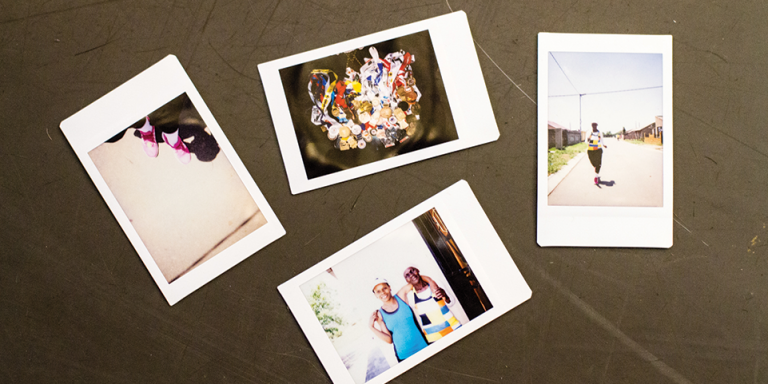 We are inspired by Nonhlanhla, someone who is young at heart and inspires the young to prosper. Watch our Prosper film  and get to know some of the other pensioners just like her:

Let us introduce you to Neville van Sittert: Meet Neville, a Tennis Champion at 75