Meet Neville, a tennis champion at 75

“I thoroughly believe that aging really is what you make of it and through my holistic approach, I’d like to turn a hundred years old.”  In this process, Claude Mohonathan has not only effectively changed his own lifestyle by making his well-being a priority, but also positively influenced the lives of his friends, family members and even acquaintances.

A change of focus after a career that spanned over more than 30 years, was just what Claude needed to re-awaken his body, and mind. Now, at 56 years young, he works flexible hours and he spends the rest of his days keeping his body just as flexible by teaching yoga, running and exploring the world with his wife of 31 years, Sandy.

Claude is convinced that his youthful outlook on life, and appearance, can be attributed to the fact that he has been doing yoga for the past 15 years and eating healthy balanced meals. “I went on a massage course to help me understand the human body, and help my family when they had aches and pains. In the process I started thinking about what my own body would feel like when I started to age. I asked myself questions like ‘would I still be able to walk at sixty?’ And, ‘what would my back feel like when I’m seventy?’ At that moment, I decided that the answer to these questions came down to the way I treated and nurtured my body from that day on.” As soon as he discovered how to effectively change his own lifestyle, this positive way of living overflowed into the lives of those around him.

After three decades in the same industry, he realised that his life had become a comfort zone and that his daily routine didn’t make him happy anymore. “I had this burning desire to get my mind working again and the only way I could see that happening was by taking a leap.” Shortly after making that decision, he relocated to the US with his wife and they stayed there for two years. Claude embraced his new environment and continued to positively influenced those around him – even though he didn’t always realise it. During his time in the US, he got the opportunity to teach yoga in a female prison. Claude wasn’t aware which crimes the prisoners he was working with had committed, and he didn’t ask them either. It was only much later that he learned that he was teaching prisoners who were jailed for committing serious crimes, such as armed robberies, how to find their inner peace. “Apart from teaching yoga in the prison while I was in the US, I also learned how to ride a Harley Davidson, got my American driving license and I saw more than two thirds of the country. It really opened my eyes to the way that I wanted to live out the rest of my life.”

Claude admits that his perception of old age has changed quite a bit in the past 40 years. “When I was a schoolboy, I used to look at people that were the age that I am now and think to myself ‘I never want to look like that’. That made me realise very early on that I don’t want to be an old person with a bent back who can’t do anything for myself. I thoroughly believe that aging really is what you make of it.”

He still maintains the important balance between his work time and personal time by making a conscious effort to visit his happy place – their family holiday home in Umdloti, Durban – at least once a month.

And the future? “I’d like to turn a hundred years old.” On his road to achieving this goal, he’s determined to live his best life, help others to reach their own health goals, and grasp every opportunity that comes his way. “The key is a holistic approach. Your outlook on life should be positive. You should look at what you put into your body – that’s about 70% of it and ultimately you have to keep your body strong through any form of exercise.” 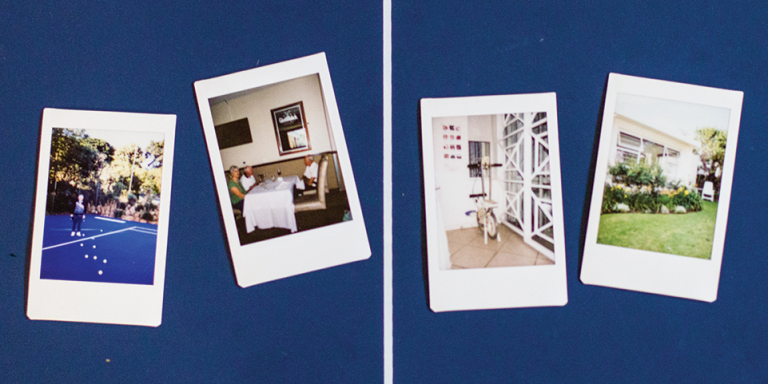 We are inspired by Claude, someone who is young at heart and inspires the young to prosper. Watch our Prosper film and get to know some of the other pensioners just like him: