What we're about | Written by Danielle Houston

The emergency closure of the M2 motorway between the Crown Interchange and Maritzburg Street earlier this year posed an unprecedented issue for Absa - an increased security risk for clients and staff. However, in true Absa spirit, this problem was not only met with a solution, but the potential to take back part of the CBD and unite one of South Africa’s biggest banks with the City of Joburg.

Although a group effort, Absa is arguably the leader of this initiative with some of the largest contributions to the project having been made by the bank.

The need for intervention

On 28 February the M2 motorway was shut down for the foreseeable future. This effectively turned all main roads that lead into the CBD into “the new M2”. Less than a week after this news became public, Absa had already started implementing additional safety procedures. “Before the M2 road closure, we had 22 security officers standing on what we call Safe Corridors – safe routes within the city. Right now, we are posting 180 security officers per day,” highlighted Riaan Crafford, Absa’s Head of Physical Security and Violent Crime Investigations. “Deployment has changed because the risk profile has changed, and the safety of our staff is paramount,” he further explained.

The chance to come together

The M2 road closure facilitated conversations between all the relevant parties for the first time in ages. According to Crafford, these parties pulled together to create what they call the Forum for Integrated Risk Management (FIRM). “There are close to 500 cameras in the CBD, which are being monitored from a centralised point, as well as visible and undercover Metro officers.”

Overall, between Absa, participating banks, the JMPD and the City of Joburg, positive changes are being made. “There is going to be a huge presence in the CBD. 1 500 traffic wardens are undergoing training, 700 of whom will be dedicated to the CBD alone and very soon you will start seeing security officers and wardens stationed with yellow bibs, regardless of affiliation, many of whom will be along our Safe Corridors,” Crafford said. In addition to the security officers, Absa also provides shuttle and vehicle escort services for staff and clients to and from their premises until 21:00 in the evening.

Perhaps the most exciting insight of all, according to Crafford, is Absa’s investigation into drone technology as another solution. “We are in very advanced drone technology discussions,” he claimed. “There is a lot of regulation around it, but we have identified a vendor that actually spear-headed the anti-rhino poaching drone initiative in the Kruger National Park. If all goes well, we will be the first city in the world to deploy and make use of drones in this way: flying in a CBD area and monitoring the grid.”

Absa intends on using the drones to compliment the static cameras on the street. “We would like to have drones flying routes that talk to mobile units on the ground,” Crafford explained. “The challenge is not only the red tape and regulations that need to be managed, but also the matter of mapping out the most effective routes.” The presence of illegal wiring in the CBD poses a problem to this, because Crafford and his team need to account for where the drones should rise and fall based on obstacles such as these.

Absa is partnering with law enforcement, to make this initiative a reality which will ultimately benefit all residents of, and visitors to the Johannesburg CBD. “We’ve encouraged them to run the initiative,” Crafford explained. "This allows for the drone to be considered as a police chopper and will allow for the project to continue long after the M2 reopens. We’re in the final stages of having this approved and getting started with proof of concept. So, if we do this here and it works, we can make use of this technology in other South African CBDs.”

Giving back to the community by taking back the CBD

With the anticipation of the M2 re-opening in the future, whether it happens in October or further down the line, the question of whether this will continue has been raised. “I think it will, but perhaps not on the current scale,” Crafford said. “But we’re making all the right noises and there’s been a lot of urgency from the MEC down.”

2020 also promises to bring change with an influx of new residents who are expected due to the opening of Towers Main, which will bring with it retail and residential opportunities. “We need to ensure a large presence. Besides the 180 security officers on our Safe Corridors, we’ve also got 160 security officers on the campus.” The increased presence of security in the CBD has seen a measurable decrease in crime-related incidents - something Crafford is confident can be maintained now that the ball is rolling.

Absa’s efforts are making a considerable difference, but it’s still up to you to look after yourself. Here’s a handy checklist to keep in mind when you’re travelling in and around the CBD. 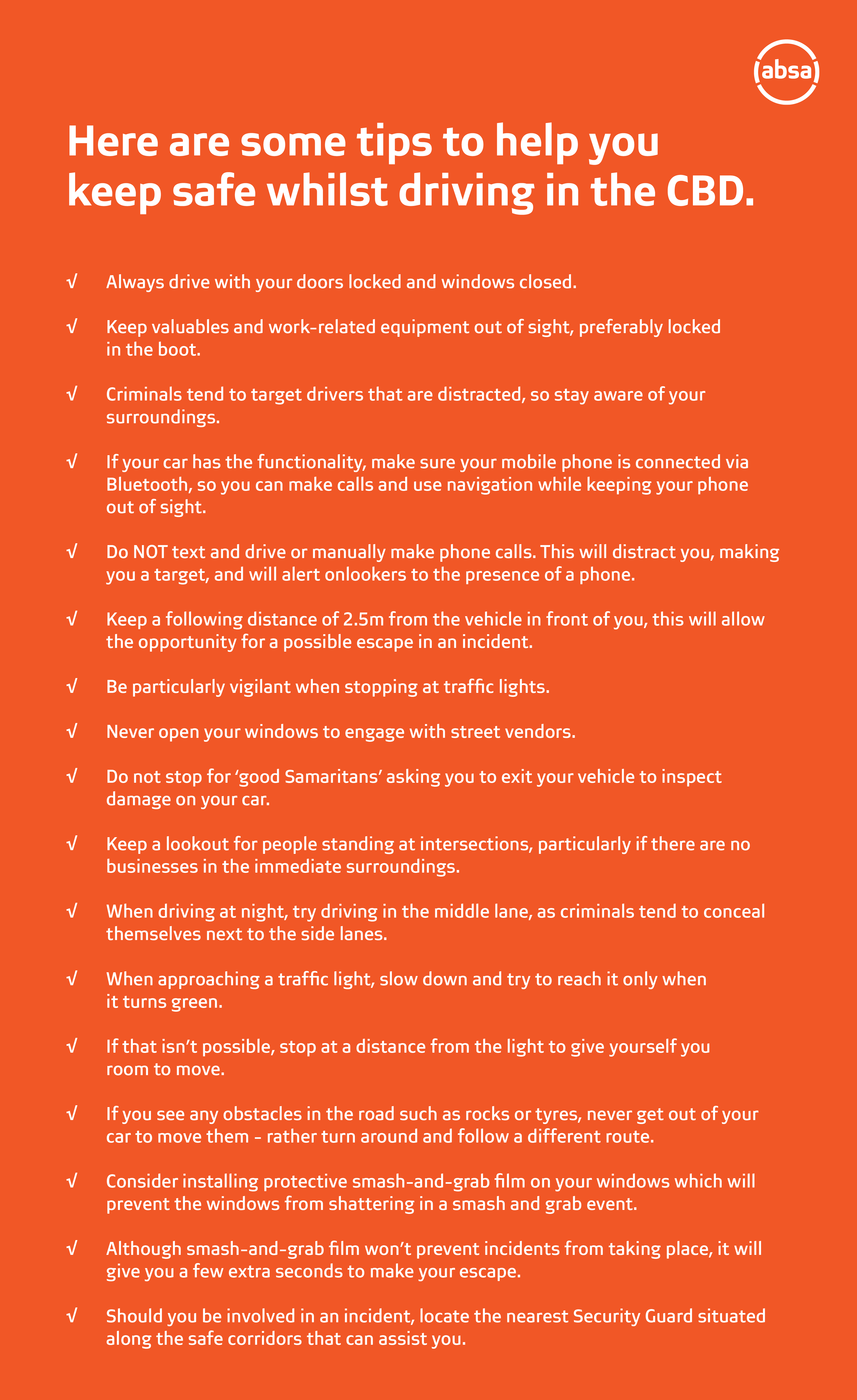 If you liked this you will love...