So far, 2018 has been a year of remarkable price volatility in South Africa’s currency and government bond markets. Since late 2017, we observed a euphoric market reaction to a new South African political dawn and the immediate market-friendly steps taken by the freshly shuffled government. This seemed to play out well for investors initially, but unfortunately the euphoria didn’t last long. These occurences were followed by a gradual, then powerful reversal, as weaker economic indicators and confidence levels, combined with the realities of the complex economic challenges ahead, began to develop more clearly.

We also noticed similar weakening trends for both the rand and South African government bonds in the run up to the ANC elective conference which took place mid-December last year. This was followed by a strong recovery all the way into the end of March 2018, but then we reached a turning point. South Africa’s inflation outlook was comfortably within target, so it was announced at the Monetary Policy Committee (MPC) meeting that the interest rate was to be cut towards the end of March. At this meeting, the MPC commented on the fact that the currency was being over-valued. This comment seemed to stop the currency appreciation in its tracks, despite several analysts forecasting continued appreciation trends for the rest of the year. Since this pivotal point, the global and domestic picture also deteriorated sharply with global trade threats and a shrinking global money supply adding to the negative economic outlook.

All things considered, these South African market movements could, however, be almost entirely attributed to global developments, with limited influence from domestic factors. It is well known that the South African currency and capital markets are highly liquid and therefore carry the burden of emerging market secular trade flows in more pronounced and heavier ways than less liquid and less developed countries. This means that South African markets often feel more heat in bear markets, compared to when the emerging market backdrop is supportive.

During the December 2017 elective conference, there was a 6% to 7% appreciation in the rand and government bond prices (as indicated on the graph between the vertical lines) momentum slowed down towards the end of the year, only to resume aggressive strengthening at the start of 2018. At the same time, powerful foreign buying often seemed overly optimistic compared to historic foreign investor behaviour.

To make sense of this, it’s important to filter out the many unique moves or factors that are unique to the South African context by looking at global market prices. In the graph below, we can see that when we overlay the US dollar index (a general index of the international value of the dollar over the benchmark South Africa bond yield (R186) and the rand) the behaviour of these asset prices have been well correlated. 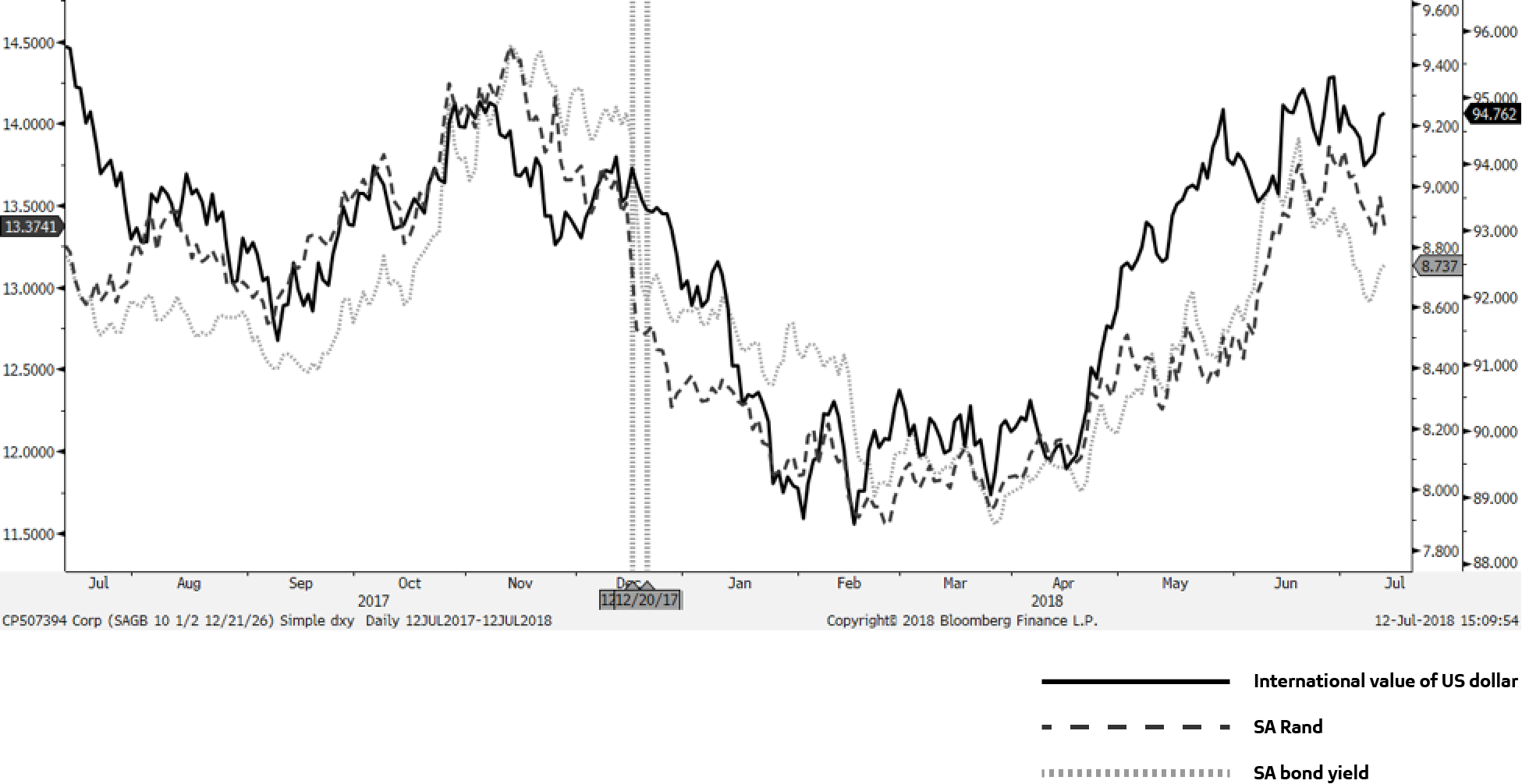 It is clear that domestic asset prices have been influenced by global developments and other factors that can’t be ignored – as a result, the South African bond market has sustained foreign selling in excess of R50 billion since April 2018 and not necessarily due to factors of its own design.

At the same time, we still have many uniquely South African factors and positive changes that support investment and which compel us to remain cool-headed - even when it feels increasingly difficult to do so.

From pricing in a small probability of another cut in interest rates at the time of the March MPC meeting, the market is now seeing only rate hikes over the next two years. But, on the surface inflation has remained surprisingly low and the MPC’s ability to contain it within the target range (3-6%) and slowly influence expectations towards the 4.5% middle has shown encouraging success so far. Foreign exchange pass through ((ERPT) which refers to the currencies influence on inflation) is a risk – but as demonstrated by the muted signs of the VAT hike on inflation so far – this risk is not yet to be feared.

South Africa’s longer bond yields have sold off (long maturity bonds that are issued by a country’s sovereign government and are denominated in the country’s own currency) not only due to an increased interest rate expectation, but also because of a hefty increase in term premium. Assuming that the Reserve Bank isn’t planning to increase interest rates anytime soon, we currently have one of the highest term premiums in the emerging market (EM) universe.

South Africa’s political backdrop is reflected by its sub-investment grade rating, and as such the 10-year yield isn’t likely to dip below 8% on a sustainable basis. Yet, from a cyclical perspective, there is no reason why bonds cannot reprice, especially when considering the way in which the country’s political leadership has changed. As a domestic investor with yields on long-term government debt now ranging anywhere between 8% and 10%, against an inflation outlook that, although rising, remains forecast to be below 6% by most analysts, there are good reasons to be a selective buyer of South African bonds.

We shouldn’t ignore the global pressures that influence our capital markets, but we also need to assess the risks realistically and practically. If the real valuations appear attractive on a longer-term outlook, the window of opportunity may be more obvious when stability returns. Once global sentiment turns, South Africa’s bond market is set to be one of the outperformers in the EM universe.

If you liked this you will love...